My Story
Me Myself and “Ana” 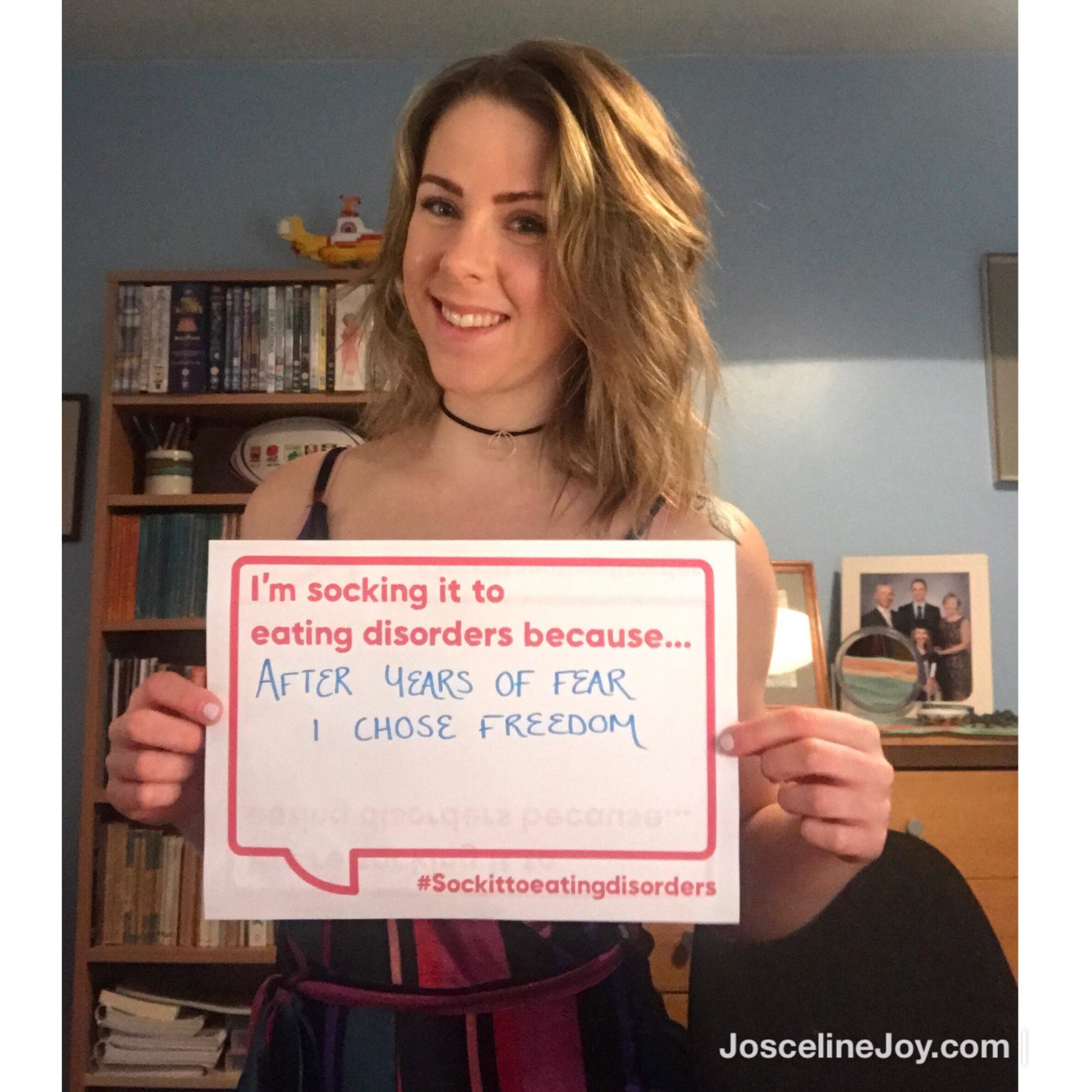 My name is Joss Walden, a Surrey Uni Psychology Grad (BSc) and mental health campaigner affiliated with the UK’s leading charity for Eating Disorders, Beat, and later this year will be joining forces with Taste Life UK.
I am actively involved in various projects surrounding mental health and disordered eating recovery, including twice being a guest speaker on BBC 2 Victoria Derbyshire show, running local workshops and organising fundraisers.

In aid of #EatingDisordersAwarenessWeek
I’m supporting the Beat (the UK’s largest eating disorder charity) campaigns; “Sock It To Eating Disorders” and “andBODY”, by sharing my insight into the complex world of eating disorders to break down stigma and promote recovery.

Having some sort of disordered relationship with food is becoming so common, and there is a fine line between when it becomes a full blown eating disorder.

If you do resonate with anything in this post know that you are not alone; seek council from your GP, local mental health or wellbeing services, or access online forums such as Beat, Mind, Taste Life UK.

I suffered with anorexia for 6 years, officially diagnosed when 16, although I had struggled with disordered eating and anxiety since I was about 14.

Anorexia robbed years from mine, and my families, life. Years spent too and from hospitals, isolated in fear, and caught up in its daily mind-manipulating games.

I didn’t have the typical teenage years spent enjoying 6th form, I had to drop out of A level studies and my first degree.
Instead I watched the world go by from hospital windows, in various different lengthy psychiatric stays, off and on meal plans, being weighed every day, prodded, probed, by different Doctors.

I named my illness “Ana” (original I know), I found naming it helped me detach myself from the entwined state of illness and me. Later on in recovery this helped me to distance myself from it, this “label” was something I could, with help, release the grip from.

It took me a while to see the destruction Ana caused.
Ana destroyed relationships, caused arguments, led me to suicide attempts, and largely kept me isolated.

It was a very dark time.

Even being told that my organs were shutting down, my hair falling out, my pulse slowing wouldn’t scare me into recovery. My illness was so all encompassing.
That growl in my tummy, and the thoughts in my head, became a comforting friend that helped me in some way.

The more consumed I was with its whims and wants the less I could feel painful or stressful emotions. A mental fidget spinner, I was kept preoccupied, “safe”, controlled.

Close friends kept in touch; anxiously I attended parties, or join family holidays but wouldn’t fully enjoy these occasions as I was always in fear of my routine and control being broken.

Eating disorders in general, are complex disorders; even for those suffering from them it can feel like an endless battle to understand.

Despite the common notion that you have to be emaciated, malnourished or not eating to have an eating disorder (ED) the latest stats suggest otherwise:

It is estimated that in the UK alone 1.26 MILLION people are suffering from an ED; 10% are believed to have anorexia, 25% Male, 40% bulimic and the rest OSFED (otherwise specified eating or feeding disorder)which includes Binge Eating Disorder

Eating disorders do not discriminate against ethnicity, gender, age, body size, race, they are not found in a number sewn into your jeans or reflected on the scale…they can impact anyone, anywhere, #anyBODY.

Their development is multifaceted (accumulation of factors that add up putting someone at risk) and their function unique to each individual. A way to cope, and if you can imagine having any coping mechanism taken away that’s going to leave you vulnerable, open to the elements, open to feelings, fears, anxiety.
How do we know we will cope with this without our eating disorder there?

Eating disorders often co-occur with other mental health disturbances such as depression, anxiety, and obsessive-compulsive disorders.
They are complex psychiatric disorders and not simply a ‘diet gone wrong’. They can’t simply be fixed with a “few good meals”… (Something I had said to me so many times).
So despite having similar behaviours and symptoms they are complicated to treat and recovery is not a fast, or linear, process.

Eating disorder behaviours offer safety and escape, a way for the mind to avoid, or even punish oneself, for the underlying stress, pain or trauma.

Surely if something is detrimental to your health then why wouldn’t you want to recover?
Why can’t you “just eat”?
Cancer patients wouldn’t refuse there treatment so why would someone with an eating disorder not want recovery?

So often I get asked “how do you recover?” and I wish I could tell you one magic answer that will free you, that would remove your anxiety, silence that voice that says if you choose recovery you’ll “lose control” or that it’ll all go wrong.

In my own recovery I experienced many different treatments, therapies, medications…I relapsed a lot.
Motivation went through highs and lows, as did my anxiety.
Tears were shed, there were many sleepless nights, and monotonous days.

I want you to know that although illness isn’t a choice, it comes full of daily choices; the choice to take your “medicine” everyday despite not wanting to eat
The choice to not give in to anxiety and purge off the calories running, vomiting, using laxatives
The choice to open up to a trusted counsellor or therapist; to be vulnerable, raw, real, honest and open despite your illness telling you not to let anyone in.

Choosing to recover doesn’t mean you’ll wake up the next day and it’s all sunshine and fear free mealtimes.

Recovery constantly felt like this endless battle, one step forward two steps back. I remember trying to break some of the disordered eating habits and rituals and feeling such immense panic and anxiety. It was incredibly uncomfortable at first, but with practice I reassured myself that actually I could manage.

I went from being trapped in a victim mentality to developing self-awareness, learning how to communicate my feelings, and setting boundaries and personal goals for myself, and this pushed me into “survivor” mode.

I can honestly say there isn’t a single person I have met who will say that despite being the harder option, recovery was a regret.

I am now 5 years free from relapsing and I can truly say it has been the best few years of my life so far.

Hold onto every glimpse of freedom you get and keep choosing life.

Check out other Blogs:

A Happy Life is a Healthy Life.